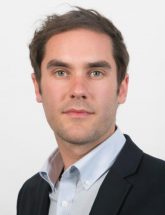 Adam McVey is Leader of the City of Edinburgh Council and of the Edinburgh SNP Group. He was elected in 2012 to represent the city’s Leith ward and served as vice convener of the Transport & Environment committee for three years prior to becoming Edinburgh’s youngest ever Council Leader in 2017.

He’s committed to our City Vision 2050 to be a greener, fairer and healthier city, while making sure Edinburgh continues to grow and maintain its role as a leading economic hub in Scotland.

During his time as Leader, Edinburgh has set up a Poverty Commission to look at how we make sure everyone can benefit from Edinburgh’s success, and, more recently, a Climate Commission to consider how the city responds to the climate emergency and meets its ambitious target of becoming carbon neutral by 2030.

He’s also led calls for the powers to be able to levy a tourist tax, generating much-needed new revenues to be reinvested in the city and its services, and a workplace parking levy which will support the city’s drive to be more sustainable.

His background is in economics and international law and he has worked for an accountancy firm, social investment charity, the Fringe Festival and for a leading human rights charity.

Towards affordable cities
Upcoming events
All events
GET IN TOUCH