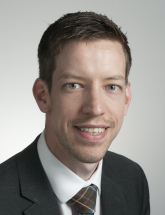 Councillor John Alexander is the Leader of Dundee City Council.

He has been an elected representative in Dundee since 2012, holding senior positions in the governing administration including Convener of Housing and Convener of Neighbourhood Services.

As the political leader, John and his team set the strategic direction, agenda, and policy development of Dundee City Council. This includes a leading role and oversight of Dundee’s £1 billion Waterfront Regeneration, the creation of the Michelin-Scotland Innovation Parc and the £350 million Tay Cities Deal.

He is involved in several key bodies including the Academic Health Science Partnership, the Dundee Fairness Commission and the Dundee Partnership which encompasses public bodies such as NHS Tayside & Police Scotland in addition to the private sector, academia and voluntary sector.

He also holds the role of Chairman of the Scottish Cities Alliance, an organisation which is a unique collaboration of Aberdeen, Dundee, Edinburgh, Glasgow, Inverness, Perth & Stirling in partnership with the Scottish Government. The Alliance is focussed on sustainability, economic development and promoting investment opportunities across the cities.