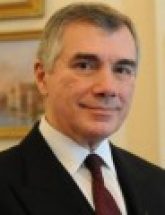 Ambassador Ünal Çeviköz was born in İstanbul in 1952. He graduated from the Bosphorus University, Department of English Literature in 1974 and Political Science in 1978. He also holds a master’s degree in International Relations from Free University of Brussels (1993).

Ambassador Çeviköz joined the Foreign Service in 1978. He served in the Turkish Embassies in Moscow and Sofia and in the Turkish Consulate in Bregenz. He joined the International Secretariat of NATO in Brussels in 1989 and worked in the Economic and Political Directorates till 1997. He also served in different political departments in the Ministry. His main areas of specialization were Eastern Europe, the Balkans, Central Asia and the Caucasus.

Between 2007 and 2010, Ambassador Çeviköz has held the position of Deputy Undersecretary for Bilateral Political Affairs in the Ministry of Foreign Affairs. His portfolio covered Eastern Europe, the Caucasus, Asia, Africa as well as international security issues (NATO, OSCE, disarmament).

Since July 2010, he serves as the Ambassador of the Republic of Turkey to the United Kingdom of Great Britain and Northern Ireland.

Ambassador Çeviköz is married and is the father of two children. He speaks English, French and Russian.

EXPERT SPEAKER AT PAST EVENT
London,

Turkey Investment Roundtable
Upcoming events
All events
GET IN TOUCH