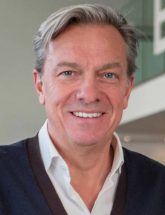 With more than 30 years’ experience at Broadway Malyan, Stuart has been Group Chairman since 2010 and is a Director of Broadway Malyan Holdings Ltd. Having started his career in Weybridge and then London, Stuart relocated to Lisbon to open Broadway Malyan’s first international studio in 1996 and then helped launch the Madrid studio in 2000 and Shanghai and Singapore in 2007.

Based in Lisbon but operating worldwide, Stuart has a significant breadth of international experience across a range of sectors – with particular expertise in retail, workplace and large-scale, mixed-use schemes. He has been responsible for several award-winning projects, including the Roche Pharmaceuticals headquarters building, the Forum Coimbra Shopping Centre – which won 4 major international awards – and the Forum Barreiro.

Committed to creating quality spaces and places through simple, rational design, Stuart is still involved in projects from an early stage right through to completion, holding workshops and reviews with his design team every week.

OUTLOOK 2020: Retail Trends
Upcoming events
All events
GET IN TOUCH