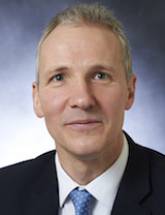 Stuart Black joined the Highland Council as Director of Planning and Development in February 2008, and has been Director of Development and Infrastructure since April 2014.

He is one of the city representatives of The Scottish Cities Alliance, a unique collaboration of Scotland’s seven cities – Aberdeen, Dundee, Edinburgh, Glasgow, Inverness, Perth and Stirling – and the Scottish Government working together to promote the country’s great economic potential.

The Alliance also leads the work on the Smart Cities programme. Through the Scottish Cities Alliance millions of pounds are being invested to make Scotland’s cities smarter, using new technologies to accelerate and transform the delivery of city services.

Stuart started his career with Hillier Parker Chartered Surveyors in London before embarking on a 6-year career as a lecturer at Aberdeen University where he taught Land Economy. Following this, Stuart was appointed Head of Economics at Highland and Islands Enterprise where he worked between1996-2000, before becoming Director of Strengthening Communities from 2000. In 2002, Stuart was appointed Chief Executive of Inverness and Nairn Enterprise, and in 2007 Director of Global Connections with HIE.

Investment in a changing...