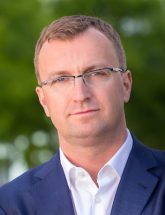 Robert Dobrzycki has been heading Panattoni, the European arm of one of the largest industrial developers in the world since 2005. Before joining Panattoni, Robert Dobrzycki was employed by industrial developer Menard Doswell & Co, where he started in 1999 as an accountant. In just a few years, he made his way up to the position of managing director. He is a Fellow of the Royal Institution of Chartered Surveyors (FRICS) and holds a master’s degree in business management from Warsaw University.

After 16 years of Robert Dobrzycki’s dynamic leadership, Panattoni has built more than 14 million sqm across Europe to become the continent’s leading development company. Panattoni has active operations in many European markets such as  UK, France, Italy, Germany, Poland, the Netherlands, Spain, Sweden, Austria ,the Czech Republic and Slovakia. In the last five years Panattoni has been ranked as the top logistics developer by PropertyEU magazine due to having delivered the largest volume of industrial space in Europe.