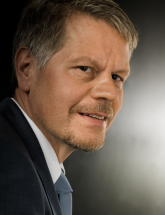 Raimund is a Corporate Real Estate professional with 25 years’ experience in all sectors of Real Estate. Starting his career 1991 he has worked for a “medium sized enterprise” with a portfolio across all assetclasses, he has worked 3 years for Union Investment and continued with 14 years’ tenure at AmazonEurope. At the cutting-edge ecommerce giant, he has been part of an amazing success story witnessing a growth from 600 million USD net sales to around 130 billion USD in 2016, building the most advances ecommerce logistic network for Europe.

As Real Estate Director and member of the European Leadership team Raimund has built and headed the Amazon EMEA Real Estate team being involved in the strategic network planning and design of the European Fulfillment Network. He has been a significant contributor of the new generation of European Fulfillment Centers. He and his team have been in charge for the search, acquisition and implementation of 34 FC ́s, and 25 smaller hubs for the transportation and the prime now network totaling 3 million + square meter additional warehouse space in Europe.

In June 2016 Raimund has left Amazon taking a 15-month sabbatical including an around the world trip together with selected consultancy mandates. As keynote speaker, has given talks about digitalization and the impact of exponential growth. In September 2017, he has started as Vice President Corporate Real Estate for the number one European ecommerce Fashion platform Zalando SE Berlin. Since June 2018 he is also Vice Chairman of the Committee on Logistics Properties in the German Property Federation.

Presentations and TV Report
‘Sustainability trumps everything for us’: Raimund Paetzmann, Zalando SE

‘There is no limit to the growth of e-commerce’: Raimund Paetzmann, Zalando