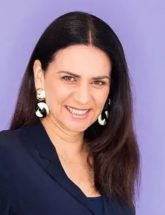 Among Patrícia Viana’s key areas of expertise are M&A operations related to real estate, sale and leaseback transactions as well as construction matters.

She has advised approximately 500 foreign investors in real estate acquisition operations in the context of real estate investments in Portugal, the programs Golden Visa Portugal and Non-Habitual Resident Portugal.

Since 2014 she has participated in M&A operations related to real estate investments, especially in the retail area – Shopping Centres – and coordinated due diligence teams and was also involved in the negotiation and closing of the operations in which she was involved.

In 2008 she was in secondment at a real estate fund management firm where she assisted on the day to day activities of the managed funds, in the years that followed she participated in the creation and regulation of investment funds in Angola and Portugal.

Between 2006 and 2010 her activity was centred primarily on advising real estate developers in constructions, licensing and sale of residential and tourism development as part of the team responsible for licensing and development of a number of tourism projects.

She has extensive experience in advising on sale & leaseback transactions as well as renting in the context of construction.

Patrícia Viana is regularly consulted by foreign offices regarding the Golden Visa and Non-Habitual Resident in Portugal programs and has contributed to Folha de São Paulo articles on Portuguese tax exemptions for foreign residents.

In 2020 Patrícia Viana was nominated in Legal 500 Real Estate and Construction ranking of Next Generation Partners.

Patrícia Viana is a has been with Abreu Advogados since 2008. Abreu Advogados is consistently recognized as one of the most prominent real estate investment law firms in Portugal.

Portugal Investment Briefing
Upcoming events
All events
GET IN TOUCH