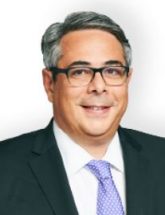 Olivier Elamine is one of the founding members of alstria and became CEO of the Company in November 2006.

Prior to the founding of alstria, he was a Partner of NATIXIS Capital Partners Ltd. (NCP; formerly IXIS Capital Partners), participating in more than EUR 6 billion of pan-European real estate transactions and leading the acquisition of the Barmer and Stadt Hamburg portfolios. Olivier joined the Real Estate Investment Banking team at CDC IXIS as a Director in 2003 and was one of the founding members of NATIXIS Capital Partners Ltd. He started his career in 1996 at the French Embassy in Morocco before joining Ernst & Young in 1998 as a consultant in the real estate industry and from 2000 to 2003 as head of the Sales & Leaseback advisory team.

Olivier holds a civil engineering degree in Real Estate and Construction from the Ecole National des Travaux Publics de l’Etat, Lyon and a Master in Building and Construction Science from the Institut National des Sciences Apliquées, Lyon. He is also a Non-Executive Director at COIMA RES S.p.A. SIIQ and Member of the advisory board at Urban Campus Group SAS

Desk-sharing may not be the answer for offices post-Covid; Olivier Elamine, alstria office REIT AG

Re-setting Real Estate: Covid-19 and the rise of ESG and social purpose
Upcoming events
All events
GET IN TOUCH