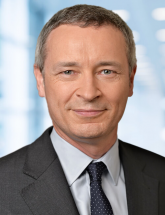 Markus is currently a Luxembourg director for REVETAS, a real estate fund focused on CEE and SEE. Among other mandates, he is a non-executive member of the board of directors of AROUNDTOWN S.A., a listed company investing into commercial real estate. Since 2012 he is a partner in SIMRES, a Luxembourg based real estate private equity boutique.

Markus has eighteen years experience in corporate banking and for more than 15 years has been a leading real estate financier in Central Europe, principally with RHEINHYP and EUROHYPO. In 1997 he set up RHEINHYP’s Central European property lending division opening offices in Poland, Czech Republic and Hungary, and in 2001 he helped to set up its US operations. In 2002 Markus took over Eurohypo’s CEE division and served as Head of CEE & Northern Europe and Israel from 2007 to mid 2012.