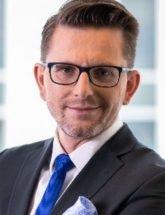 Karel is currently a Senior Portfolio Manager for the European Shopping Center Fund Series being appointed in April 2018.

He was in different positions within the company in various geographies. Between 2016 and July 2019, Karel acted as Head of Investment Operations for Poland and he has been part of retail business line leadership team, having an active role in CBRE Global Investors’ retail asset management organization across Europe. Since January 2014 until May 2018, Karel was in the position of Head of Asset Management for Poland having a portfolio of more than EUR 1.5 billion.

In Poland, Karel acted previously also as the asset manager of large prime shopping centres, such as Zlote Tarasy (Warsaw), Wars & Sawa and Junior (Warsaw) and Sfera (Bielsko-Biala), was responsible for major redevelopment of Ogrody shopping centre (Elblag) and in the position of Head of Asset Management oversaw a team of 4 asset managers that cover other properties in the portfolio.

Since 2017, Karel has been responsible for asset management of Skanssi Shopping centre in Turku, Finland (owned by ESCF II) and since January 2018 has overseen the projects of Jagersro, Malmo and Port73, Stockholm, Sweden. (both assets owned by ESCF II).

Previously, he worked on the position of Head of Strategy and Research CEE, concentrating on providing strategic advisory to the CEE organisation and especially CEE based Funds that managed properties in Poland, Czech Republic, Hungary, Slovakia, Romania and Austria.

Prior to joining CBRE Global Investors in 2006, Karel Zeman worked as Head of Research for Czech Republic and Slovakia in Cushman & Wakefield.

Karel earned a Master degree in Regional Geography and Regional Development at Charles’ University of Prague. Karel is member of RICS and ICSC.

Karel is native Czech but lived in Poland for many years. He is fluent in English, Polish and Czech.