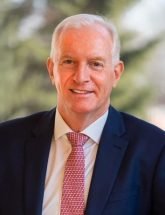 Ian joined Trammel Crowe in February 2021 as MD, Head of European Logistics and is acknowledged as a warehouse expert both by occupiers and fellow warehouse specialists.

With more than 40 years of experience in the real estate sector and more specifically in the warehouse and industrial sectors, Ian’s career started at Strutt and Parker, London in 1981 where he spent 16 years rising to become a Commercial Partner within the firm. He specialised in Industrial and Business Park development advice and leasing. Ian then joined Gazeley Properties in 1997 as Development Director UK before leading Gazeley into mainland Europe, where he became Managing Director responsible for France, Spain and Belgium. During his 10 year tenure, he was responsible for UK developments in and around London and Southern England. In Western Europe his teams secured over 850 Ha of development land and successfully developed over 350,000 m² of warehouse space. Ian joined Panattoni as Managing Director Western Europe in 2007 where he was responsible for development including warehouse and out of town retail space. He was on the Panattoni European Management Board. In 2009, Ian left Panattoni to become CEO of P3. Under his 10 years of leadership, P3 grew in value from approximately USD 297MM to over USD 4.5BNP across Europe. Ian was educated at Whitgift School, Croydon, UK and at Bristol Polytechnic (now University of the West of England) where he studied Valuation and Estate Management. Ian is a past Chairman of the Industrial Agents Society and is a Fellow of the Royal Institution of Chartered Surveyors (FRICS).