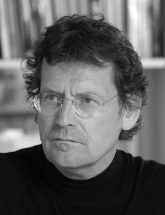 Eric Parry is an acclaimed British architect whose award-winning practice, Eric Parry Architects is currently working on the design of the tallest building in the City of London, the 73 storey 1 Undershaft.

Based in London, the practice has recently completed Four Pancras Square, an 11-storey office building withlandscaped rooftop and ground floor retail space that has been fully let to music giant Universal Music.

Eric has developed a strong reputation for delivering beautifully crafted and high-quality contemporary buildings that respond to their context. His practice is renowned for several highly prestigious commercial projects in London’s City and West End including Stirling Prize shortlisted schemes at 30 Finsbury Square and 5 Aldermanbury Square. The practice is also responsible for One Eagle Place in Piccadilly and St James’s Square, which broke UK’s rent record last year.

He has held a number of eminent posts including President of the Architectural Association and currently serves on the Royal Academy Architecture Committee, the RIBA Library Committee, the Kettles Yard Committee and the Mayor of London’s Design Advisory Panel.

His contribution to academia includes fourteen years as Lecturer in Architecture at the University of Cambridge and lectureships at the Graduate Design School, Harvard University and the Tokyo Institute of Technology.