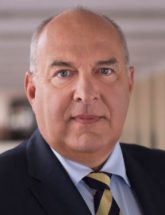 Tadeusz Kościński has extensive experience (over 30 years, including international) in the banking and administration sectors, where he held managerial positions.

In 1997, he was appointed director of Bank Zachodni WBK S.A. Before that, he worked for Polski Bank Rozwoju S.A., Bank Przemysłowo-Handlowy, Bank Śląski and Bank Pomorski, as well as two London banks.

Graduate of Goldsmiths University of London.

Founder of the “Kresy Historii” [“Borders of History”] foundation.

On 15 November 2019, he was appointed to the office of Minister of Finance.

The CEE Summit 2020
Upcoming events
All events
GET IN TOUCH