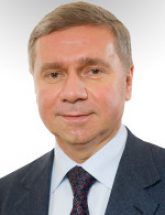 He graduated with honors in 1989 from the Moscow State Institute of International Relations with a specialization in international journalism and completed his postgraduate course at Moscow State University specializing in global economic issues.

In 1992, he was an intern at the New York Institute under the Investments and International Accounts Program and in 1993 joined a course for banking specialists at Fairfield University (USA).

In 2004, he was appointed CEO of Moscow Bank of Reconstruction and Development (MBRD).

From 2005 to 2009 he acted as the Chairman of the Board of MBRD, he also served as Senior Vice President and Head of External Relations of JSFC Sistema.

From 2009— Chairman of the Board of Business Council for Cooperation with India, member of the Russian-Indian Inter-Governmental Commission on Trade, Economic, Scientific, Technological and Cultural Cooperation.

Russia Investment Briefing
Upcoming events
All events
GET IN TOUCH