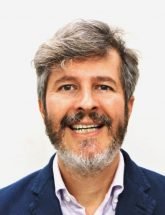 Alberto ’55 has been operating in the real estate market for 30 years, both as an advisor and investor, and currently manages his own company, Guizzo, a dedicated advisory and services platform, specializing in industrial & logistics properties.

Alberto forged his career in 1989 at Milano Più, a residential development company and commercial property asset management, where he worked until 1995.

From 1996 until 2001 he was a Partner and Head of the Industrial & Logistic division at Healey & Baker (now Cushman & Wakefield).

From 2002 to 2009 he was appointed Director of the Industrial Investment and Asset Management division at Pirelli Real Estate. During his time in this role, he set up a JV between Soros Real Estate Fund and Pirelli Real Estate and subsequently created Spazio Industriale (Italy’s largest industrial fund ever) and, consequently, the listing of Spazio Investment NV at AIM of London SE in 2006.
At that time Alberto was member at the executive management board at Pirelli RE.

After take over of Spazio from Laxey Partner Alberto was Chairman/CEO of Celtic Italy, the Italian branch of Celtic Development SA ( Laxey major shareholders ), a Polish listed company, involved in Pan European real estate investments from October 2009 until September 2012 and he continued to work on Spazio portfolio on sale side and residual valorization

He was Head of Industrial and Logistics at CBRE Italy from February 2013 until October 2014.

Prior to founding Guizzo, he was a Director at Algebris Investment, helping Algebris set up an NPL fund operating in Italy.

EXPERT SPEAKER AT PAST EVENT
München,